Some amazing writers have been on the receiving end of a MacArthur Genius Grant: George Saunders, Sandra Cisneros, Karen Russell. (I’m still waiting for my own phone call.) Today, the MacArthur Foundation released a report explaining that among the 897 innovators and creatives to receive its $625,000 no-strings-attached grant are an exceptionally high number of movers.

On average, 30 percent of Americans (and 42 percent of the college-educated folks) live outside the state where they were born. But for the MacArthur Fellows born in the United States, that number skyrockets to 79 percent. Which leads me to wonder: Do creative people move more often? Or does moving make you more creative?

Maybe a bit of both. Creatives tend to congregate in urban centers (an enormous amount were living in California when they got their award) because they’re attracted to cool, zeitgeisty places with a lot of diversity, culture, openness, and art supply stores. The more creatives who are there, the more come. Plus, even geniuses have to make money, and big cities like New York, San Francisco, and Los Angeles offer more job opportunities. 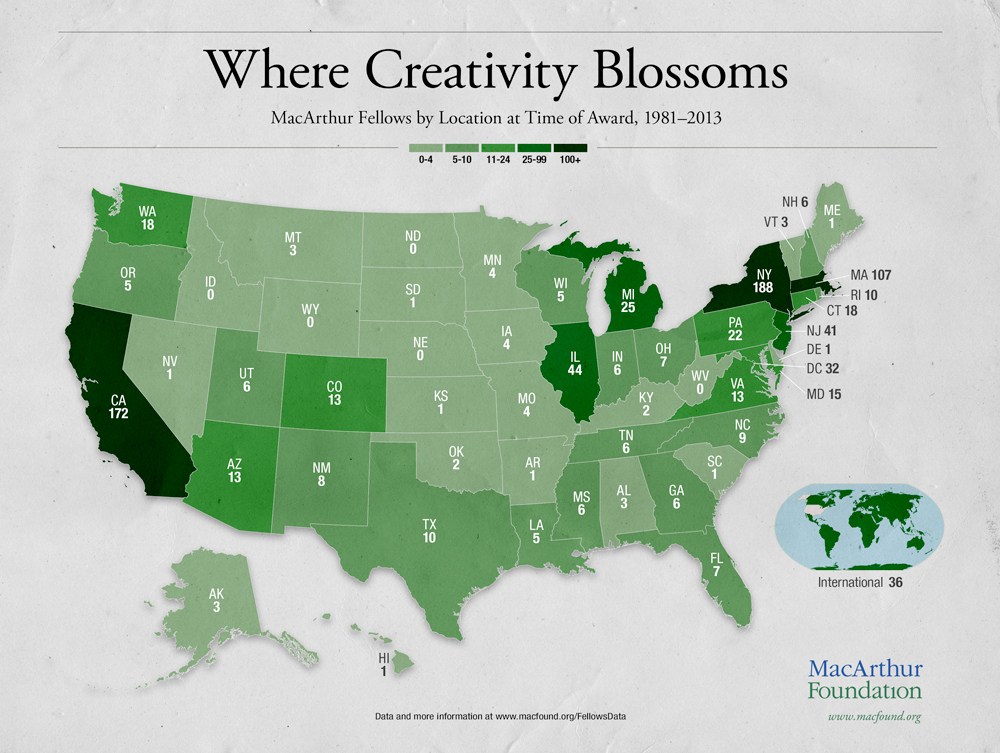 But it’s not inconceivable that being highly mobile is one of the things that makes creative geniuses creative geniuses. According to research by social psychologists Adam Galinsky and William Maddux, living abroad increases creativity, perhaps because it exposes people to the kind of dynamic situations and novel ways of life that produce new ideas.

Sure, Paris would be nice, but there’s no reason why you couldn’t get the same benefit moving from Utah to Iowa to Texas to Virginia (ahem). At least there’s this assurance from the MacArthur Foundation:

We strongly believe that creativity exists everywhere, and one of our continuing goals will be to recognize and inspire others to embrace that creativity, in all of its many manifestations, both inside and outside traditional, expected locations.

Translation: Creatives in Idaho, North Dakota, Nebraska, and West Virginia–the only states ignored by the MacArthur Foundation so far–should be waiting for their phone call.