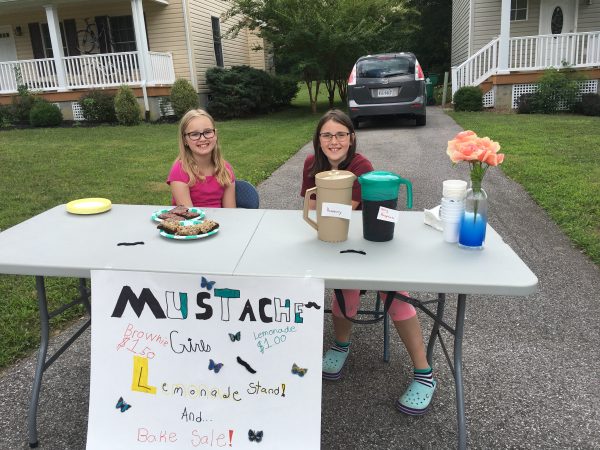 My kids have spent approximately 1 million hours staring at screens this summer, and this morning my horror at my own lazy parenting came to a head. “NO SCREENS!” I intoned. I helped my distraught 10-year-old recover from the shock by brainstorming what she could do instead. Number 1 on her list was “Have a lemonade stand,” an activity I normally discourage because it requires arduous tasks like hauling the folding table from the basement. But desperate times and all. With her friend Grace, Ruby made cookie dough brownies and two containers of Crystal Light, posted hand-drawn signs at the top of the street, then expectantly set up shop (and the folding table) at the end of the driveway.

Let me tell you one of the things I like best in the world: people who stop for lemonade stands.

Every potential customer is driving a car, speeding elsewhere. And still, shockingly, a dozen people stopped, including our neighbors from both sides and one old guy with a scruffy beard who braked hard, shifted into reverse, and drove 75 yards backwards to buy a plastic cup of lemonade from two kids. Even the UPS guy partook. Almost everyone said, “Keep the change.” In about an hour the girls made $25, half of which they’re going to donate to the Blacksburg Volunteer Rescue Squad.

What’s that impulse that compels people to stop for lukewarm raspberry lemonade and brownies that have been manhandled by 10-year-olds without food handling permit? It is an act of almost pure selflessness. And it represents one of the best ways to love your community. You stop just to make two 10-year-olds giddy happy. You stop because nurturing neighborhood relationships matters more than rushing elsewhere.

I’m trying to be the kind of person who stops at lemonade stands, literally and figuratively. Seeing other people who do the same made me love where I live today.

Shameless self-promotion portion of the newsletter: The San Francisco Chronicle recently published a selection of first lines of books, and mine was among them. So that’s cool. Also cool: giving a TEDx talk in Fargo, North Dakota, last week. I’ll post the video when it’s out.
————————————————————

1. I didn’t know emojitecture was a word, but I love it.
2. “Intimate connections rarely expose us to new ideas because we already know what, for example, our spouses, mothers and sisters think.” An argument for getting to know your neighbors, from my friend Marc Dunkelman, that goes perfectly with this CityLab piece about the power of weak ties as seen at the neighborhood Y.
3. Turning immigrants into American citizens is a boon for cities.
4. What activity would make a neighborhood bench a place to hang out? And are you willing to organize it?
5. As you know if you’ve read my book, I’m lukewarm about “best cities” lists, but I like this one because I’ve visited 14 of the 15 named cities! (Sorry, Nashville. Soon, I promise.)
6. I say “soda,” and I’m starting to say “y’all.” I’M A MONSTER.
7. This beautiful video about an Iowa town struggling to re-create itself exemplifies place attachment and kinda made me cry.

More internet-based goodness and happy thoughts if you subscribe to my newsletter.