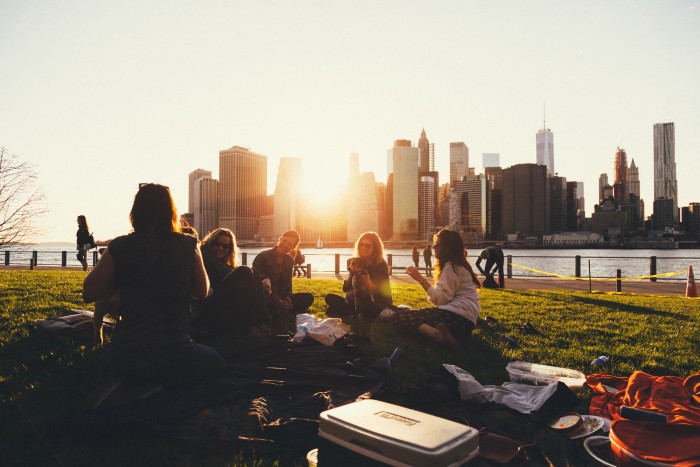 In 2005, my sister Heather was basically living inside her own real-life version of Friends. She and my brother-in-law were renting a two-bedroom apartment in a complex in Tustin, California, where no fewer than eight of their best friends and relatives had also taken up residence. A band of super-social newlyweds, they were hanging out all the time. Squeezing into each other’s living rooms for Settlers of Catan marathons. Coordinating Sunday dinner potlucks. Arranging playdates as the babies came along.

The one downside: They were renters. And because Southern California real estate prices were crazy, everyone knew they could never afford to buy a home there. One of the BFF couples decided to drive to Arizona and make a down payment on an affordable new house in the desert. That set off a mass exodus. Soon the entire group had picked up and resettled in the outer-ring suburbs of Phoenix, this time in their own single-family houses. Eleven years later, my sister still lives on the same block as two of her very best friends and their families. Their children have grown up together. Heather is living the dream. (Her dream, at least.)

Except for one thing: Arizona is not really Heather’s jam. I’ve seen her go pale with yearning at the sight of Pacific Northwest greenery. She’d love a little less heat and a little more color in her landscape. Like most of us, she sometimes fantasizes about moving—but she always stops herself. Because she loves her Arizona people. And her people make it impossible to leave her place.

After I posted last week about place attachment, Heather messaged me: “Not sure if it is my city I love, or the people in my city that makes it home to me. I think I could quite easily pick up and move to even another state if I wasn’t so committed to certain people. So, does that make me place attached or just people attached?”

Plus, place attachment and social cohesion—the phrase researchers use to describe the kinds of strong social relationships we have with people around us—feed each other. One study of data from the New York City Block Booster Project examined whether 2,000 residents of Brooklyn and Queens had a sense of community. They asked questions like: Do you recognize the people who live on your block? Do your neighbors watch out for each other? Do you and your neighbors want the same things from your place?

The strongest predictor of sense of community turned out to be place attachment. In other words, when participants agreed with statements like “I think my block is a good place for me to live,” “I feel at home on this block, and “I expect to live on this block for a long time”—signifiers of attachment—they generally also knew, liked, and watched out for the people who lived there with them.

It’s a bit of a chicken and egg problem. Does place attachment make us like our neighbors? Or does liking our neighbors make us feel more attached to our place? Functionally speaking, a sense of social cohesion with the people who live in your city is as happiness-inducing as loving the city itself. For all intents and purposes, they feel the same way.

When we have a strong social network in our town—when we throw communal potlucks, chat with our neighbors, join the adult rugby team—we tend to feel happier and more engaged where we live in all the ways that lead to place attachment. On the other hand, when we feel lonely in our city or annoyed by the people we interact with every day, it’s incredibly difficult to fall in love with our place.

I’m nowhere near as social as my sister. (Honestly, her situation sounds like a bit of an introvert’s nightmare.) That’s okay, because there are plenty of other ways to become place attached, many of which I cover in my book This Is Where You Belong.

You don’t have to do game nights and potlucks. Inevitably, though, developing decent relationships with friends and neighbors has to be part of the place attachment equation.

For Heather, loving her Arizona people probably functions the same as loving her city in Arizona. She can’t imagine living anywhere else right now. That’s a win for putting down roots.